An absolutely essential element in learning to play guitar is to develop a solid sense of rhythm through rhythm guitar exercises.

Whether you play blues, rock, jazz, funk, metal, or country, incorporating rhythm guitar exercises into your daily practice routine will lay the foundation in developing a solid sense of rhythm and an assertive connection to the beat.

Unfortunately, many players do not spend nearly as much time developing a solid sense of rhythm as they do learning scales and soloing techniques. It takes discipline and a dedicated effort to strengthen one's skill as a rhythm guitarist, so in this lesson I will outline a series of essential rhythm guitar practice exercises. Let's get into it!

1. Rhythm Exercise: Working with a Metronome

For the following exercise, no guitar is necessary! Set a metronome to quarter note=72 and simply tap your foot in sync with the clicks of the metronome while reciting “ONE-two-three-four” repeatedly out loud. This is the sound of steady quarter notes, also known as downbeats.

Now let’s add an “an'' in between each of the downbeats; as the metronome clicks, recite, “ONE-two-three-four” on the downbeats, but add “an” in between each downbeat, like this: “ONE-an-TWO-an-THREE-an-FOUR-an.” As you notice, each beat is now subdivided into two accents. This is the sound of steady eighth notes.

Finally, let’s move from eighth notes to 16th notes by adding more subdivisions. The way we got from quarter notes to eighth notes was by splitting each beat into two accents; now let’s split each beat into four evenly spaced accents, which results in the sound of steady 16th notes: as the metronome clicks, continue to recite, “ONE-two-three-four” on the downbeats, but add “ee-an-da” in between each downbeat, like this: “ONE-ee-an-da, TWO-ee-an-da, THREE-ee-an-da, FOUR-ee-an-da.” Now each beat is subdivided into four accents; this is the sound of steady 16th notes.

These simple rhythm practices for aspiring guitarists are essential in getting the feel and groove of any song.

Now let’s pick up the guitar and strum along with the metronome. As indicated in the figure below, begin by repeatedly strumming in steady quarter notes while fretting a “first position” G major chord. Then, as shown in bar 2 of the example, switch to eighth notes, and then in bar 3, switch to 16th notes.

This exercise will not only help you build speed, but will also assist with developing a solid internal metronome. 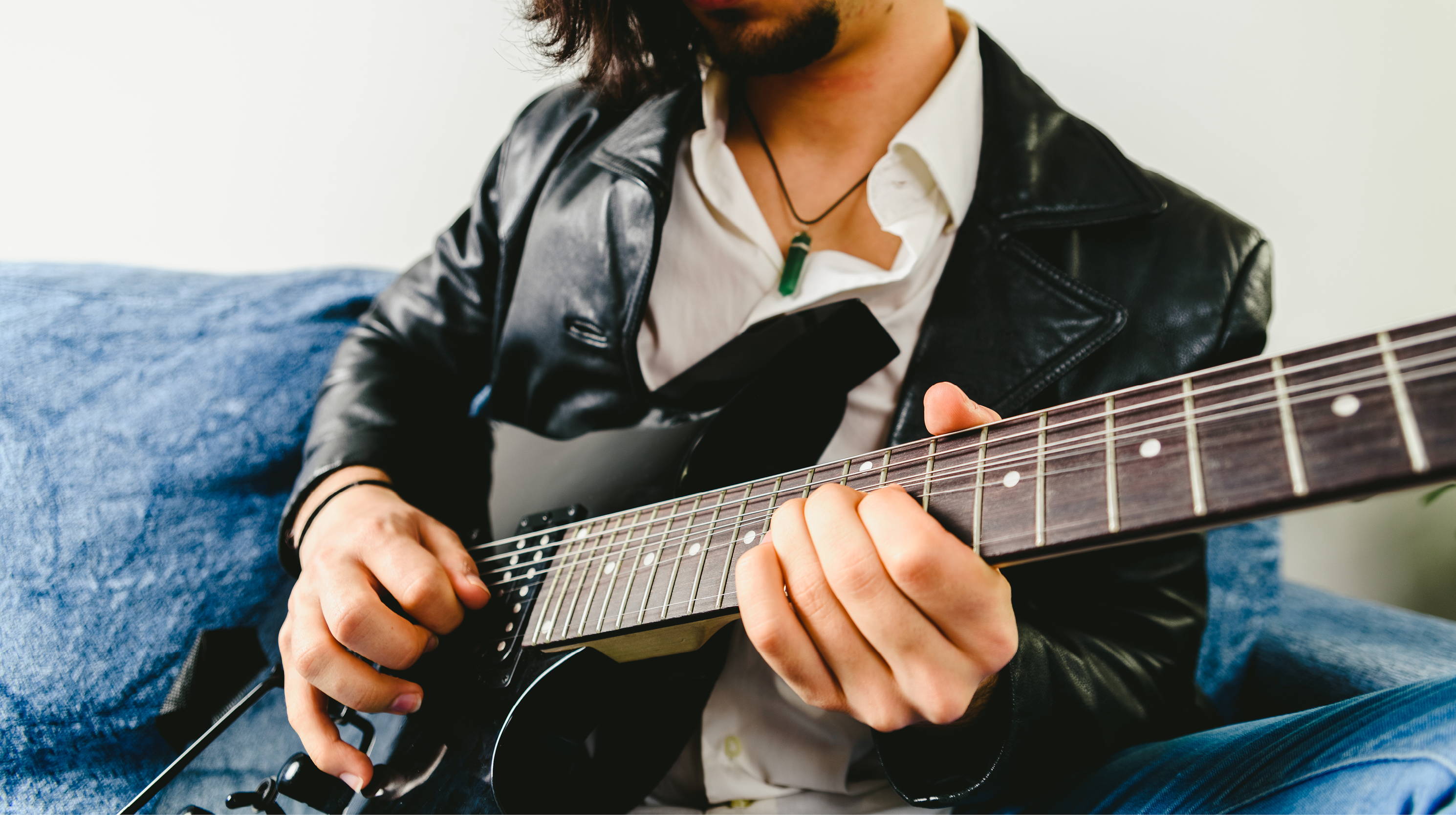 With a firm handle on the essential rhythmic building blocks of quarter notes, eighth notes and 16th notes, we can move on to syncopated rhythm patterns. Syncopation occurs when the rhythmic accents shift to subdivisions of the beat, such as the upbeats rather than downbeats. For example, moving the accents from the downbeat to an eighth-note upbeat, or 16th-note upbeat, will result in a syncopated rhythm.

One of the most commonly used syncopated patterns in rhythm guitar begins with a downbeat quarter-note on beat one, followed by steady eighth-note accents through the remainder of the bar. A twist is that the downbeat accent on beat three is omitted while the upbeat accent from the previous eight-note is allowed to ring. This sounds as, “ONE-two-AN-AN-three-an,” “ONE-two-AN-AN-three-an.” This is illustrated below:

A great way to make syncopated rhythm patterns sound more effective and “in the groove” is to incorporate muted, or “dead string,” accents into the patterns. A muted accent is sounded by first simply releasing the pressure of the fingers of the fretting hand while keeping them in contact with the strings, and then strumming across the now-muted strings. This percussive “chug”-type sound is often sounded on the downbeats of beats two and four, which will align the muted accents with standard snare drum hits on beats two and four. This type of rhythm pattern is illustrated below:

5. Rhythm Guitar Exercise: Putting it all Together

Now let’s combine these approaches into a single rhythm part that incorporates syncopated upbeat accents and muted accents with steady quarter notes. You will hear rhythm guitar parts like this in everything from Bob Dylan to CCR to Smashing Pumpkins, U2 and Nirvana:

Be sure to devote attention to rhythm guitar, and your connection to the beat while soloing as well, into your daily practice routine. Some great ways to accomplish this are to play along with many of your favorite songs while tapping your foot and striving to lock into the bass and drums on the recording.

Additionally, listening to great rhythm players can help set you on a path to success. In blues, this includes T-Bone Walker, John Lee Hooker and Jimmy Reed. Some standout rock rhythm guitarists include John Lennon of the Beatles, Keith Richards of the Rolling Stones, Pete Townshend of the Who, Malcolm Young of AC/DC and, of course, Jimi Hendrix. The funk/R&B world is full of heavy rhythm hitters, such as Jimmy Nolen, Catfish Collins, Steve Cropper, Curtis Mayfield and Nile Rodgers, among many others.

Final Thoughts: How to Get Great at Rhythm Guitar 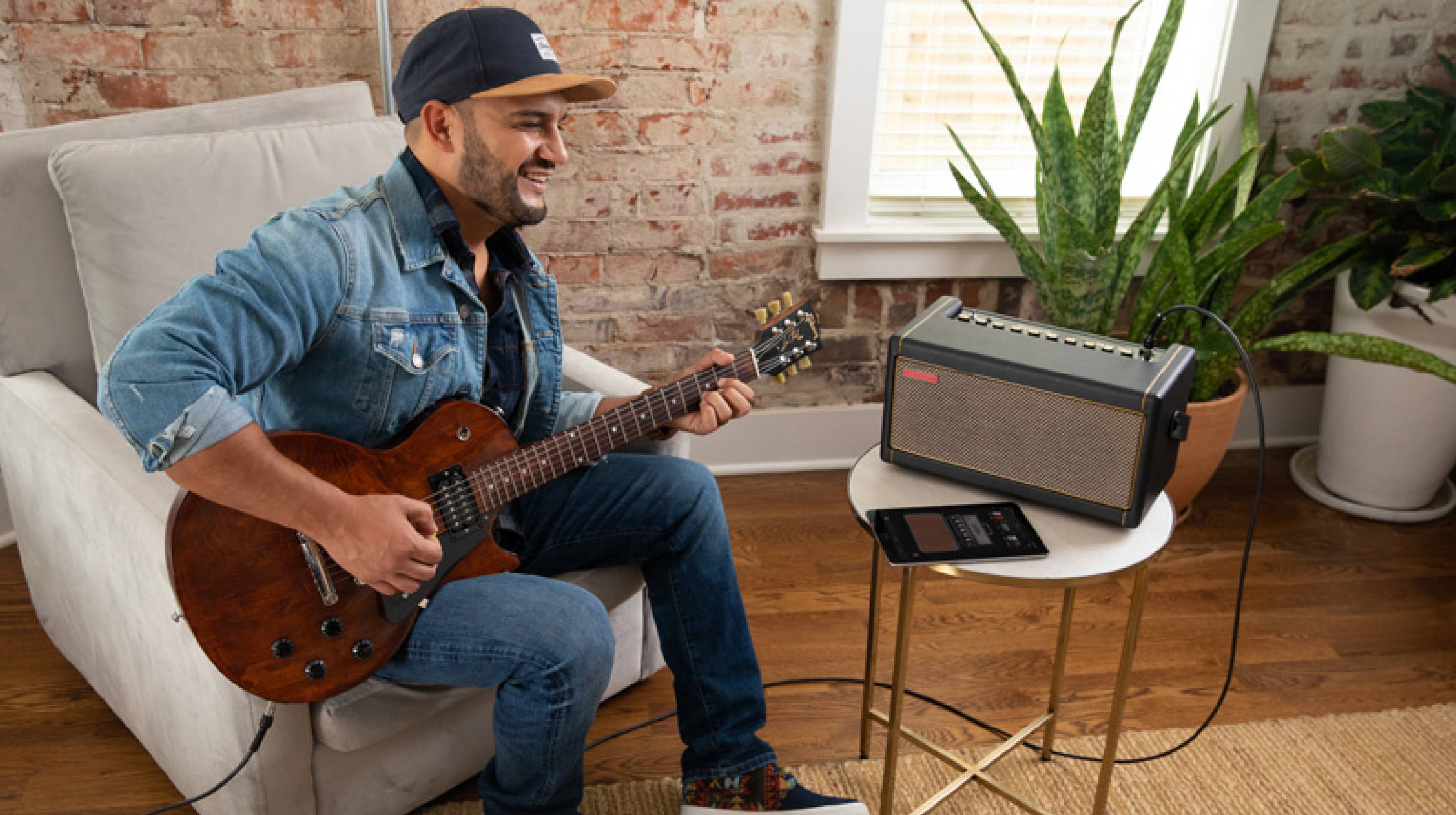 The Spark amp, with its built-in Smart Jam technology, serves as a great practice tool for developing your rhythm guitar skills, as it will provide players with a metronome as well as a wide variety of backing tracks of different musical genres to play along with. Plus, with over 10,000 tones (and counting!) on the Positive Grid ToneCloud, it's the only practice amp you'll ever need. Find out more here.

Andy Aledort has contributed to the international music scene for over 35 years as a journalist, instructor, performer and editor of Guitar World magazine. His 2019 book, “Texas Flood: The Inside Story of Stevie Ray Vaughan,” is a New York Times bestseller. He has sold over one million instructional DVDs, on top of teaching guitar privately and on online sites such as Truefire.