The Best Country Guitarists of All Time The Best Country Guitarists of All Time

The Lovin’ Spoonful pretty much nailed it in their 1966 hit song “Nashville Cats,” when they sang, “There’s thirteen hundred and fifty two guitar pickers in Nashville/And any one that unpacks his guitar could play twice as better than I will.”

Since the 1940s, country music has produced literally thousands of mind-blowing guitar players. While there are far too many players to mention in this blog, we put our heads together and showcased some of our favorite country guitarists below.

As always, these picks are unranked, as there is no denying the supernatural ability of all of the best country guitarists on this list.

Best Country Guitarists of All Time

Before there was Brad Paisley, or even Eddie Van Halen or Joe Satriani, there was the incredible shredding Telecaster monster Jimmy Bryant, and the equally amazing pedal steel virtuoso Speedy West. Born in Moultrie, Georgia, Bryant began seriously working on his guitar playing after being wounded in World War II. In the early 1950’s, he moved to Los Angeles where he appeared in Western films and played in local bars. It was there he met pioneering pedal steel guitarist Speedy West, and together, the duo recorded a series of astounding instrumentals for Capitol Records.

It was almost impossible for us to choose just one track by the duo, so we picked two, the iconic “Stratosphere Boogie” and “Flyin’ High.” If that isn't enough fancy fingerwork for you, check out Bryant’s brilliant “Stumblin’” and prepare to be blown away.

It’s also worth mentioning that in 1950, Leo Fender gave Jimmy the very first Fender guitar he ever built as a thank you for providing helpful feedback during its initial design stage. If that's not something to brag about, we don't know what is.

Merle Travis is indisputably one of the most influential guitarists in the 20th century. His unique finger picking style, known as “Travis picking,” helped shape both country and rock and roll. He was worshiped by the immortal Chet Atkins, as well as Elvis Presley guitarist Scotty Moore and Beatle George Harrison. His trademark style incorporated elements from ragtime, blues, boogie and Western swing.

If you can somehow manage to master just four bars of his phenomenal “Cannonball Rag" (see video), congratulations! It means you’re on your way to becoming a respectable country picker.

Not only is Chet Atkins considered one of the greatest guitarists of all time, but it could also be argued that he is the best country guitar player of all time as well. In addition to his flawless and ultra-sophisticated technique, he produced massive hit records for Dolly Parton, Elvis Presley, the Everly Brothers, Jerry Reed and Waylon Jennings, and is credited with inventing the modern Nashville sound.

He was often called “Mr. Guitar,” for his astounding ability to play rhythm and lead simultaneously, but we’ll just respectfully tip our hat and call him “sir.”

If anyone deserves to be hailed as the Jimi Hendrix of country guitar, it’s Clarence White. A total innovator, White not only helped popularize the acoustic guitar as a lead instrument in bluegrass music, he also invented the B-bender, a device the enabled him to simulate the sound of pedal steel guitar on his 1954 Fender Telecaster.

Unfortunately, he died at an early age after being struck by a drunk driver, but not before he was able to influence a whole new generation of country, rock and bluegrass musicians like Marty Stuart (see video) and Jimmy Page, who used a B-bender Tele with Led Zeppelin. One of the best country guitarists of all time? You bet your bottom dollar.

When you talk about the best country guitarists of all time it’s simply impossible to leave out “Mother” Maybelle Carter.

A true pioneer, she was a member of the original Carter Family, which was one of the first commercial rural country music groups. She created a unique sound for the group with innovative “scratch” style of guitar playing, where she used her thumb to play melody on the bass and middle strings, and her index finger to fill out the rhythm, which influenced the guitar’s shift from rhythm to lead instrument. She often tuned her guitar down, sometimes as many as five steps, but sometimes used a capo to increase the instrument’s range.

While she was no shredder, Carter’s style of embellished accompaniment is still used regularly in much of modern folk, rock and country music. Is she the all-time best female country guitarist? That's up for you to decide, but she makes a compelling argument in the video above.

Willie Nelson may not possess the technical chops like some others on this list, but it's the notes he doesn't play that make him such a memorable and unique guitarist. Of course, an unorthodox player like Nelson deserves an unorthodox guitar, so allow us to introduce you to his famous Martin N-20, lovingly named "Trigger."

After his previous acoustic-electric guitar was damaged by a drunken fan, Mr. Nelson bought Trigger for $750 without even seeing or hearing it in action. He then installed his previous guitar's pickup and instantly fell in love with its sound. Over the course of Willie's nearly 60-year-long career, he has used Trigger at over 10,000 shows and it has survived numerous cosmetic damages (including a big ol' hole right by the bridge), a fire, and even a failed repossession by the IRS.

Willie is so fond of the instrument, in fact, that he's on record saying "when Trigger goes, I'll quit." It's a statement that may seem ridiculous to non-musicians, but makes a hell of a lot of sense to guitarists.

This dude is a stupendous singer, a great songwriter and has sold over 11 million albums. But on top of that, he’s one of the world’s very best modern country guitarists. Described as “Eddie Van Halen on cornbread,” he’s all that and more. Here he is melting faces with his trademark pink paisley Tele on his “Nervous Breakdown.” Or if you prefer, check out his acoustic chops as he duels with Tommy Emmanuel (no slouch, himself) on the classic “Cannonball Rag.”

Discovered and mentored by Chet Atkins, Mason has been named “Guitarist of the Year” 12 times by the Academy of Country Music. Primarily a session musician, Mason has played on well over a thousand Nashville-based albums, including those of Blake Shelton, Shania Twain, Zac Brown Band, and was named one of the Top Ten Session Guitarists of All Time by Guitar World magazine.

So what does he sound like? Basically, anything you want him to sound like! In a town of incredible musicians, Brent is a king standing head and shoulders above the rest. Check him out kickin’ some serious ass on “Hot Wired” (see video) with the equally stupidly good Chuck Ward. He is without a doubt one of the best country guitarists today...or ever.

When most people think of country guitar, the first thing that comes to mind is the technique known as “chicken pickin’,” which is accomplished by “snapping” the strings against the fretboard and frets by plucking the strings. While it’s hard to say who did it first, most agree that the brilliant James Burton popularized it, and his chicken pickin’ style spread like wildfire through the country and honky-tonk world all during the ‘50s and ‘60s.

There are legions of country players like Brad Paisley, Vince Gill and Brent Mason, who continue to expand and modernize the technique, and all of them can heard on Paisley’s “Cluster Pluck” (see video) along with the master, Burton, himself. 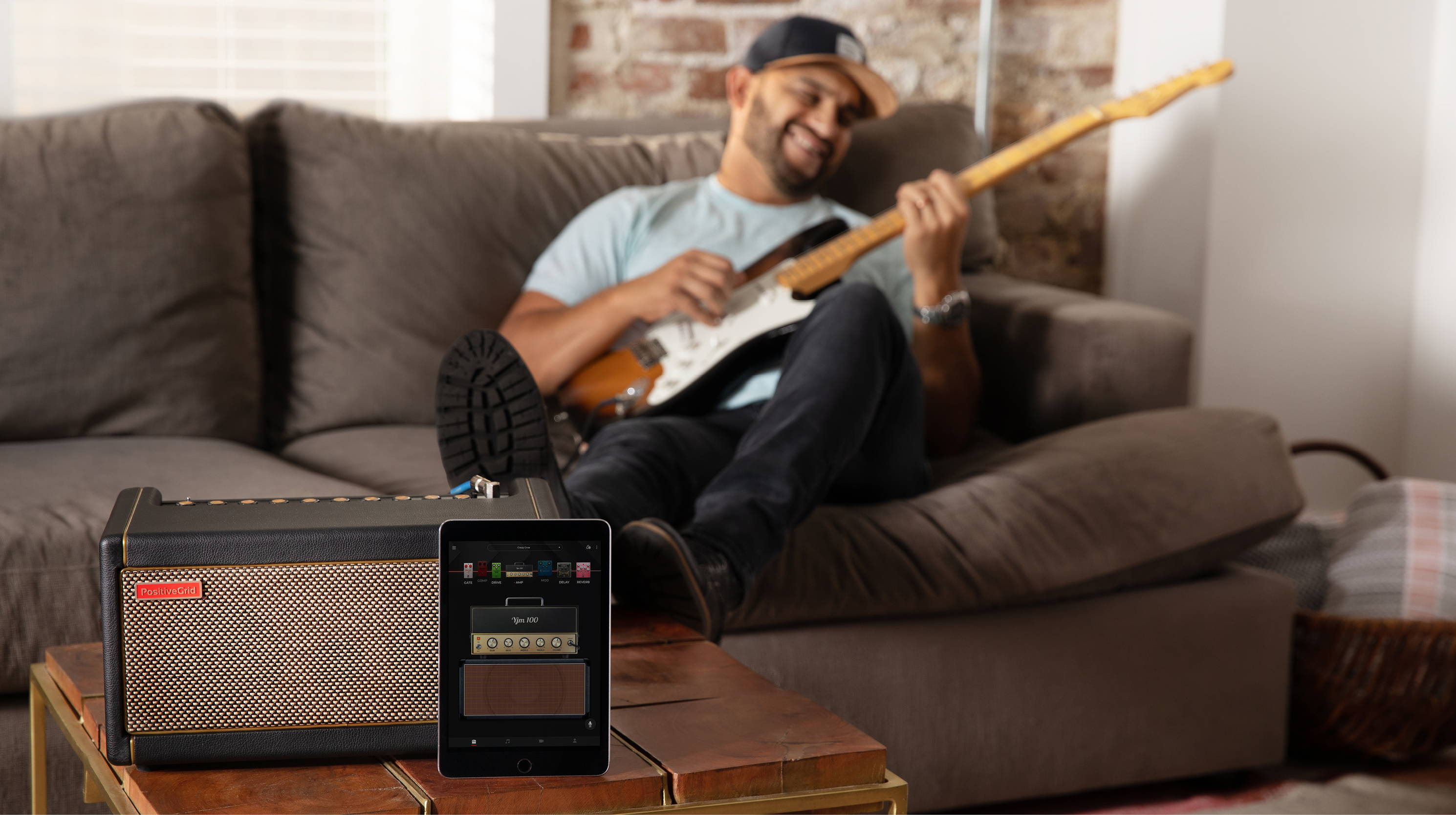 If you want to explore the sounds of any of these country guitarists mentioned above, you'll want a practice amp that does the tone chasing for you. A powerhouse 40 Watt combo, Spark is a smart amp and app that jams along with you using Intelligent Technology, with backing tracks available for any style you play. Including over 10,000 tones (and counting!) on the Positive Grid ToneCloud, you’ll never run out of inspiration. Plus, you can use Spark as your USB audio interface for easy home recording and track your ideas with the included PreSonus Studio One Prime recording software. Find out more here.