These days it seems like every guitarist owns dozens of instruments. This was not the case in the 1960’s, when most guitarists were lucky to have two or three. During their eight years together, George Harrison and John Lennon used only a small handful of instruments to create their distinctive sound. Not to mention, their amplification in the studio rarely varied from a pair of Vox AC-30s.

But every time they changed instruments it made a big impact on their sound. In the following blog, we picked five George Harrison guitars that helped shape the Beatles sound and listed the songs they were used on. If you close your eyes and imagine the songs in your head, you’ll hear the differences immediately. Or better yet, watch the accompanying videos and pay attention to the different textures. After all, there are few things better in life than revisiting the Beatles!

George Harrison often referred to his 1957 Gretsch Duo Jet as his “first good guitar.” He purchased the instrument in the summer of 1961, paying £75 to Ivan Hayward, a 25-year-old former Cunard Line merchant seaman.

“One night I saw an advert in the Liverpool Echo,” Harrison recalled, “and I rushed right over to see it. I bought the Gretsch Duo from a sailor who had bought it in America and brought it back. It was my first real American guitar—and I’ll tell you, it was secondhand, but I polished that thing. I was so proud to own that.”

By 1963, Harrison retired the Duo Jet in favor of a 1962 Gretsch Chet Atkins Country Gentleman, but not before he used it on three of the Beatles’ greatest rockers, “Please Please Me,” “I Saw Her Standing There” and “Twist and Shout.” He eventually gave the black Duo Jet to bassist (and Revolver album cover artist) Klaus Voormann, who kept the guitar for two decades. After re-acquiring it from Voormann in the mid-’80s, Harrison posed with the Duo Jet on the cover of his hit 1987 solo album, Cloud Nine.

When Francis C. Hall, owner of the Rickenbacker guitar company, found out that the Beatles would be in New York during the winter of 1964 to perform on The Ed Sullivan Show, he arranged a meeting with the band at the Savoy Hotel to show them some new instruments, including the company’s new prototype Rickenbacker 360/12. Harrison was sick, however, and didn’t attend. Luckily, Lennon did, and he thought the 360 might be the perfect match for his bandmate. “John Lennon played the 12-string, and he said, ‘You know, I’d like for George to see this instrument. Would you mind going over with us and letting him play it?’” Hall recounted later.

“So, it was the man from Rickenbacker who brought these guitars ’round for me,” Harrison recalled. “As for my Rickenbacker 12-string, I started playing it for the first recording sessions we did after we returned from those three Sullivan shows we did in ’64.” The unique, chiming tone of George’s new guitar led the British press to dub the Rickenbacker 12 as “the beat boys’ secret weapon.”

“I used to play the guitar in concerts for years, and it never gave me any trouble,” Harrison once said (above is a rare clip showing Harrison playing the Rickebacker live on “A Hard Day’s Night'' at 1:29). “It’s a great classic guitar. That sound you just associate with those early-‘60s Beatles records.” The former Beatle also noted that, for the uninitiated, the guitar could take some getting used to. “The neck is narrow, so you have to be very careful when you’re clamping the strings down there,” he said. “The first and sixth strings can slip off the side if you’re pressing at an angle.”

In June 1962, Harrison and Lennon ordered a pair of matching Gibson J‑160E acoustic-electric guitars from Rushworth’s Music House, one of the few shops in Liverpool where musicians could buy American-made instruments. The guitars had to be shipped from the United States, and according to Lennon’s sales receipt, the J‑160E cost £161.05.

The guitars were shipped to England during the summer of 1962, and George and John picked them up at Rushworth’s Music on September 10. They put the instruments to use the following day, at EMI’s Abbey Road Studio Two, to record the Beatles’ first single, “Love Me Do” backed with “P.S. I Love You.”

The two Beatles swapped guitars in 1963 for reasons unknown, and later that year Lennon’s J-160E was stolen. Afterward, he and Harrison would often trade off using the remaining instrument, which has the unusual distinction of being the only guitar used on every Beatles album. The J-160E comes standard with a P-90 pickup installed between the sound hole and the end of its rosewood fingerboard. Harrison must not have been satisfied with its tonality, as he moved the pickup below the sound hole and nearer to the bridge in 1965 prior to the recording of Rubber Soul. The pickup was later returned to its original position, but the holes added by its displacement remain.

Serial Number: 83840
Songs: Nowhere Man • And Your Bird Can Sing • All You Need Is Love

In 1965, John Lennon and George Harrison bought matching Sonic Blue Stratocasters that cost £180.60. “We sent out our roadie, Mal Evans, and said, ‘Go and get us two Strats.’ And he came back with two of them, pale blue ones,” Harrison recalled. “We used them on the album we were making at the time, which was Rubber Soul. I played it a lot on that album, most notably on the solo on ‘Nowhere Man,’ which John and I both played in unison.”

“If I’d had my way,” Harrison continued, “the Strat would have been my first guitar. I’d seen Buddy Holly’s Strat and tried to find one. But in Liverpool in those days, the only thing I could find resembling a Strat was a Futurama that had strings about a half an inch off the fingerboard.”

Harrison’s Strat underwent a trippy cosmetic makeover during the Sgt. Pepper’s recording sessions. He painted the guitar in rainbow Day-Glo colors and dubbed it Rocky. George’s psychedelic artwork inspired many guitarists, including Eric Clapton, to paint their own instruments.

On June 25, 1967, Harrison played the “Rocky” Strat during a televised performance of the Beatles’ “All You Need Is Love” on a program titled Our World, the first live television event to be broadcast globally via satellite and seen by millions.

Looking at the back of this guitar, one can see that Harrison’s custom paint job does not cover most of the original Sonic Blue finish on the back. The neck, which is unusually fat for a guitar of this vintage, is made of highly figured bird’s-eye maple. A faded dealer’s sticker on the back of the headstock indicates that it came from Grimwoods, a music retailer with outlets in Maidstone and Whitstable, southeast of London.

In the latter half of the Sixties, Fender made plans to add a solid-rosewood Telecaster and Stratocaster to its line. To get maximum attention for its efforts, the company gave Harrison the Tele prototype. (A solid-rosewood Stratocaster, meant for Jimi Hendrix, was also built but never delivered. Its current whereabouts are unknown.) The custom-built Telecaster was delivered in time for Harrison to use it during the sessions for Let It Be and Abbey Road, and the guitar can be seen in use during the rooftop performance sessions in the movie Let It Be. In December 1969, Harrison gave the guitar to Delaney Bramlett of the American act Delaney & Bonnie. It was later recovered by the Harrison estate.

The rosewood Telecaster originally featured a satin finish, but Bramlett had the guitar resprayed with gloss. He also swapped out the original tuning machines for Schallers and modified the electronics, which have since been restored. An extra string tree was also added at some point. 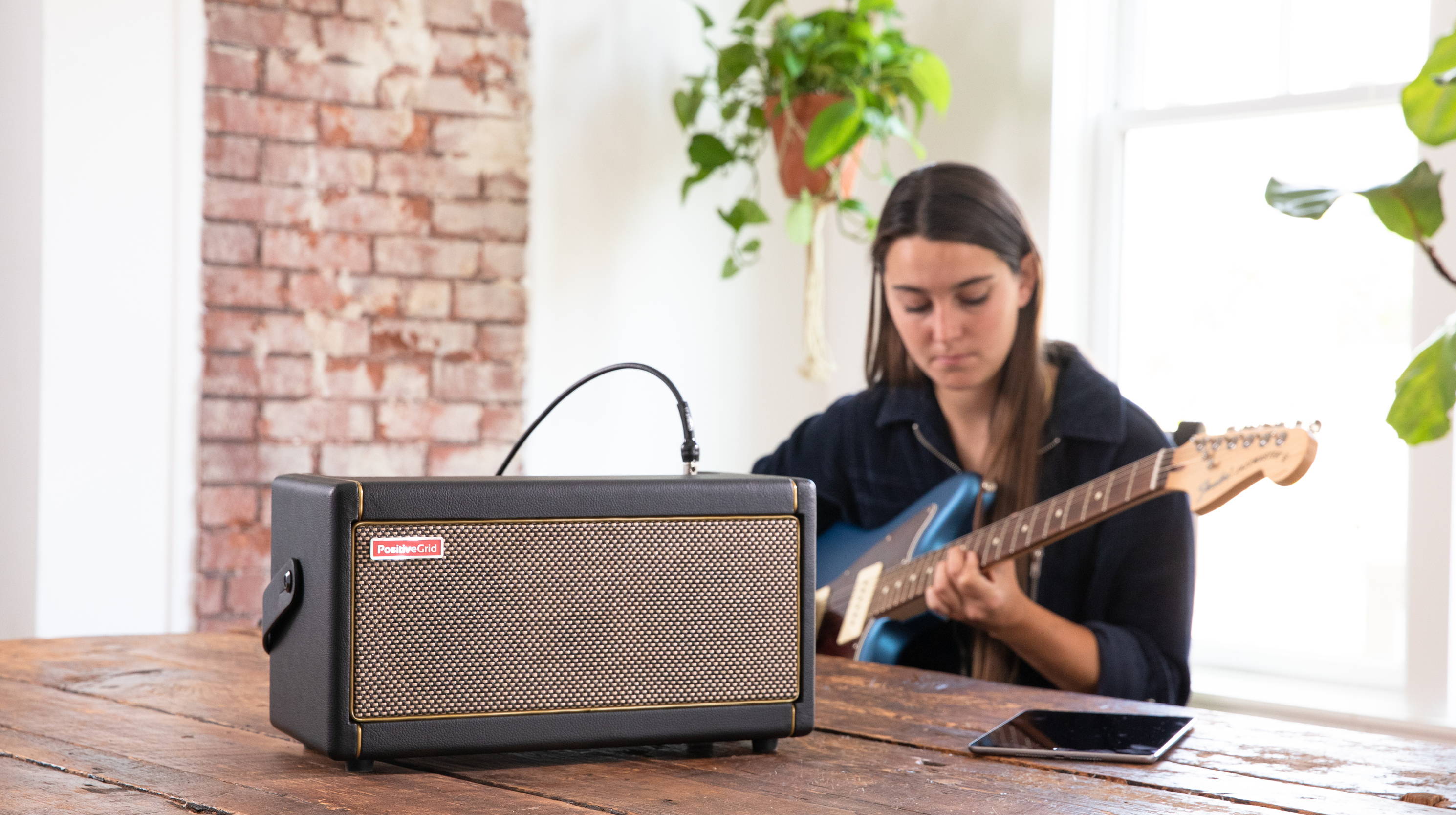 Want to replicate The Beatles' legendary guitar tone at home without breaking the bank? Let Positive Grid’s amazing Spark smart guitar amp help you out; there are plenty of Beatles guitar tones (and 10,000+ more!) waiting to be discovered through the companion app. Plus, you can use the handy Auto Chords feature to learn any of the songs listed here in real time. Want to see for yourself? Find out more here.